I decided that Beaverlick Falls needed some larger terrain pieces as a backdrop to the town and also to feature as part of some scenario driven games, so I set about building a large 'butte'.

The design allows the butte to be used as a central feature, or to be split down into three parts that can be used as individual edge and corner pieces on the table. It also makes it a little easier to store.

The construction is 6mm mdf, with the three bases being cut from a single sheet. Each piece was edged with 6mm walls where they come in to contact with the other pieces. This ensured a good fit and also provides a neat side to the pieces when they're used at the table edge. 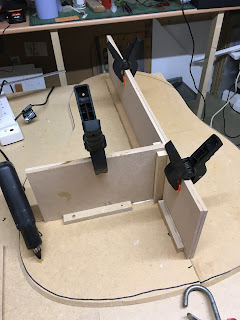 Clamping the walls together as the glue dried ensured the tops would meet with minimal gaps. 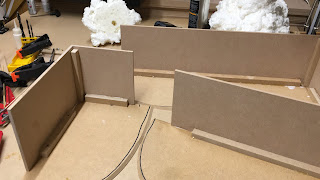 A shot of the three individual pieces. Once the sides had been stuck to the bases, I added some formers to the pieces, theses add strength to the construction, reduce warping and provide fixing points for the rock faces. 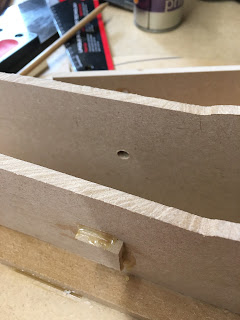 Next I drilled holes through the walls of the adjoining parts so that I can add magnets or locator pins to keep the parts aligned in play.  This was achieved by clamping the respective parts together, drilling through both walls and then adding scraps of mdf to the inside of the pieces to block the holes.  The result is two 6mm deep aligned holes that can take a magnet of wooden pin. 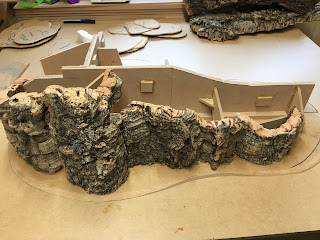 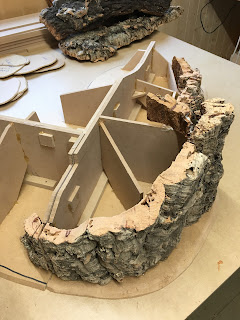 The rock faces we added using cork bark - this is generally available at pet stores where it is typically used for reptiles.  The pieces were cut flat at the bottom to make it easier to fix to the bases, but the tops were kept irregular to make it more natural in appearance.  This can be achieved by cutting part way through from the back and then snapping the bark.  It does take time, with trial and error fits of different pieces until a natural look is achieved. 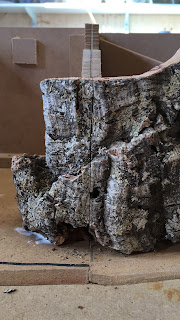 Where the pieces of the butte met, I used a piece of bark that I had cut vertically with a hand saw; attaching one half to each piece to ensure the join was less noticeable. 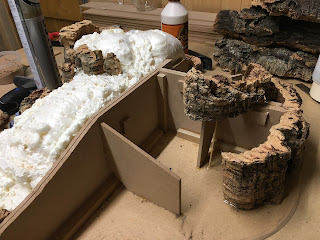 Once the rock walls were completed on a piece, I filled the inside with expanding foam.  This has the benefit of being lightweight and it bonds to the cork and mdf to produce a very stable construction.  Once the foam had cured (I left it for 24 hours) it was shaped with a sharp knife, all the 'over fill' being cut away back to the mdf formers and edges. 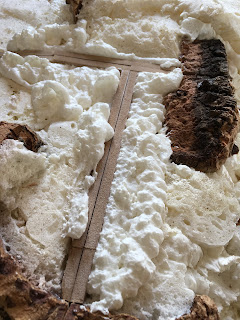 By over filling the pieces, it was possible to cut the foam back to  the tops of the walls so that the pieces will align and form a flat plateau when used together. 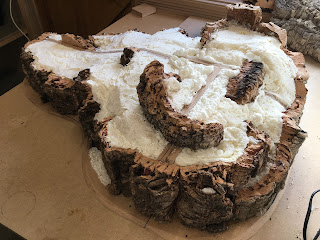 Pic of all three pieces in their respective positions. 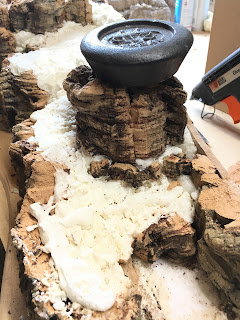 Once the foam had set I added a few extra rock outcrops - the weight is preventing this addition being forced upward by the expansion of some additional foam that was required to fill and secure it. 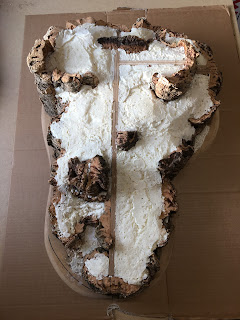 Top down view of the butte after the excess foam had been trimmed.  Trimming exposed some areas that were hollow where the expansion had resulted in larger air pockets.  These were filled with more foam and then trimmed back once cured. 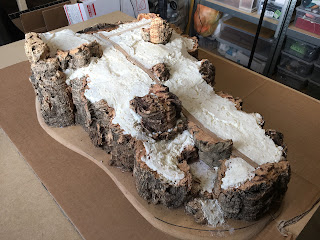 Side view showing position of pathway on largest piece. 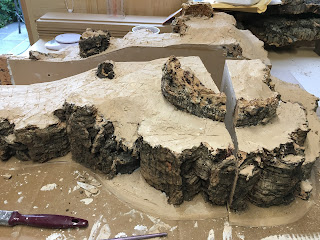 Plaster was applied over the foam and cork surfaces as a foundation for the groundwork.  The foam remains slightly soft under the surface once cured so the plaster is necessary to firm up the top. 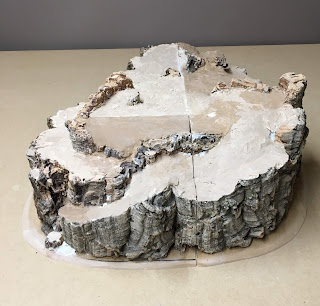 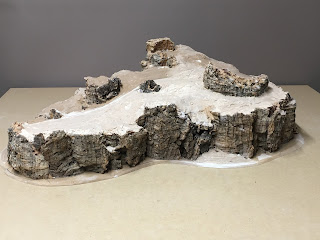 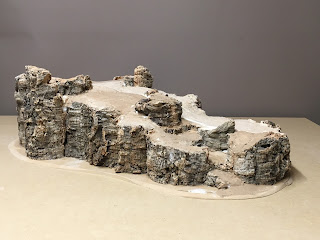 Email ThisBlogThis!Share to TwitterShare to FacebookShare to Pinterest
Labels: How To, Scratchbuilding, Terrain

I've always been interested in Old West 'Gunfight' games but like a lot of gamers I've butterflied between projects, seldom ...